This was an okay opener that felt like a very solid technical wrestling bout. If they give Jonathan Gresham more of a character he can be a champion in the future. He had a fantastic match with Jay Lethal and this was a good spot to showcase his talent. Trent Baretta accompanies Chuck Taylor down, we haven’t seen him since his injury in February. Chuck Taylor gets a roll up victory after a solid opener. ***

This felt like a shot of adrenaline that might’ve been better placed later in the card to wake up the crowd because this show was almost as long as Wrestlemania for the Live Audiences. Tomohiro Ishii gets a great reaction from an American crowd. Martinez hits a really fun series of dives and a spinning heel kick off of the top rope. Ishii hits a super brainbuster for a near fall. The South Avon Chokeslam ends this match. ***1/2

Kota Ibushi gets a great reaction from the crowd. This match focuses less on the Bullet Club Civil War storyline and more about great wrestling. Adam Page is aggressive here on the Bullet Club’s Arch Rival. Page goes for a moonsault off the barricade but Kota hops up and catches him with a German suplex which was a great spot. Ibushi hits a cross slash moonsault. Buckshot Lariat by Page, near fall. Ibushi hits the last ride powerbomb for another near fall. After a small sequence, Kota hits a Kamegoye for the win. ****1/4

This match can be summed up in one word: awkward. This match is probably the least interesting final that this tournament could’ve had. Sumie Sakai is almost too old to be here and Kelly Klein is super green. The match starts with a series of rest hold and suplexes. Then, the better options for the final come down to cheer them on and they turn the match on. Klien hits deadlift german that Sakai almost reverses to put them both down.  Klein hits a big boot for a believable near fall. An awkward DDT by Sakai ends the match and Klein’s undefeated streak is over. Sakai’s celebration is more awkward as automatically it looks like she couldn’t care less. **1/2 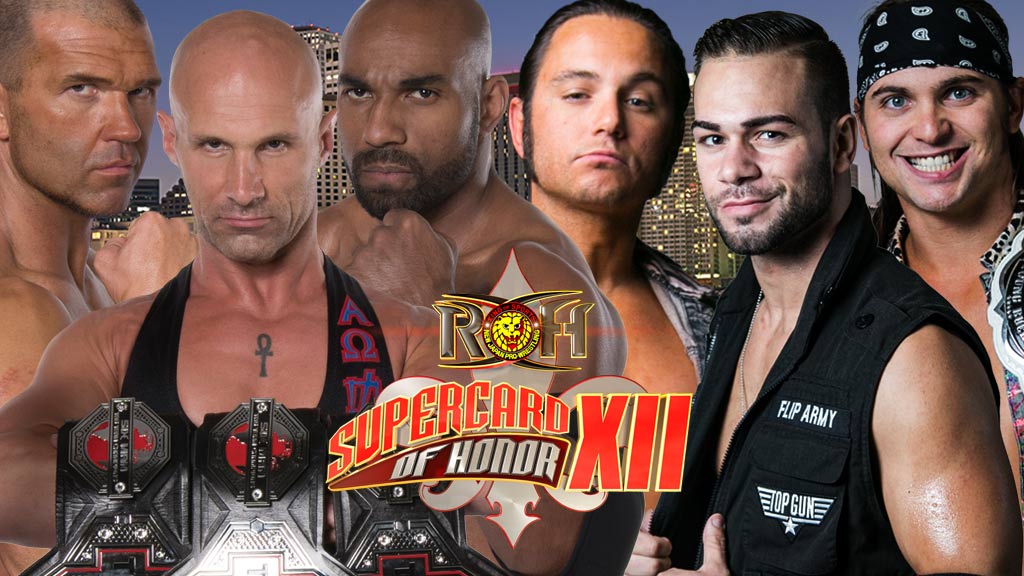 Young Bucks and Flip Gordon vs. So Cal Uncensored Ladder Match for the Six-Man Titles

So, this match isn’t in the same league as the NXT North American Ladder Match because of the lack of story but as a spotfest, this was close to the best it could be. Flip played the role that Ricochet did in NXT as the flippy guy but he was also matched with Scorpio Sky for a battle of the flippy dudes. This also continues Matt Jackson’s back injury storyline. The Bucks do their signature Cease and Desist submission through the bottom rung of the ladder to Scorpio Sky. When it looks like the Bucks have the victory The Kingdom come out to cost them the match. After that happens, the match really turns on. A series of dives outside leads to Nick hopping from ladder to ladder to corkscrew to the outside. TK O’Ryan tries to climb the ladder but the other teams work together to lift the ladder and send him out of the ring into the rest of the Kingdom. Scorpio Sky hits a brutal cutter on the apron to Matt. Nick and Flip 450 to the outside to put Matt Taven and Scorpio Sky through tables. All 6 men climb ladders and they all take each other down. Matt climbs the ladder, Christopher Daniels dumps Matt outside but Matt improvises and hits an elbow drop putting Vinny Marseilla through a table. Daniels pulls down the belts for SoCal. This is another great match in this 3 team tag feud. ****1/2

The Briscoes vs. Hiroshi Tanahashi and Jay Lethal for the ROH Tag Titles

The second half of the thrown together matches to get New Japan starts TV time after Punishment Martinez vs. Tomohiro Ishii. The Briscoes first defense on their 9th Tag Title Reign. Jay Lethal and Jay Briscoe start. This match starts crazy slow. With both teams focusing on one member for a couple minutes at a time. The Briscoes are playing strong heels here and throw multiple cheap shots. Jay Lethal and Hiroshi Tanahashi work well together but at the end, a Doomsday Device by the Briscoes close the match. ***1/2 Austin Aries joins commentary with all his belts and stakes his claim for the winner of this match. Ugh, I wish I had some good things to say here but the ending really ruined what could’ve been a good match. Early on, Silas back suplexes King through a table from inside the ring to the outside. This match was a pretty average weapons match and the story here was that the Last Man Standing Match stipulation is Silas’ battleground. My favorite spot in this match wasn’t even from the wrestlers but from the crowd. Kenny King setting up a table yells to crew “Get Out The Way”. The crowd responds to this by singing the Ludacris song. Fantastic crowd involvement which is rarely seen. In the end, Kenny King hits a shooting star press through a table to the outside but from underneath the ring, Beer City Bruiser zip ties King’s feet together for a cheap Silas victory. Afterward, Austin Aries saves King from an attack from Beer City Bruiser and Silas. ***

This match has been built FOREVER. The longest feud probably going now that Gargano vs. Ciampa ended in NXT. Is it worth the wait though, the short answer is no. Honestly, though only a few matches could be good enough to end this fantastic feud and unfortunately this wasn’t it. This match was great, amazing even but it’s hard to not be a disappointment when the build has been this good. Even getting my feud of the month for February. The American Deathlocks from Cody set up a very good submission sequence. Cody playing the crowd is one of the best things in this match. Omega hits his normal great series of signature moves. Brandi gets on the apron, Cody ducks Omegas v trigger and Brandi gets sent through a table. Flip helps Brandi to the back. Cody front suplexes Omega on the edge of a table. Superplex by Cody “This is Awesome” Chants. Cross Rhodes hit for a near fall, Cody looks similar to Wrestlemania 25 Undertaker. Cody and Omega crash into the ref and a double crossbody put both men down. The Young Bucks come down looking like they will finally make their decision, they choose to superkick Cody but Cody dodges and they kick Kenny. A final Cross Rhodes ends the match. This was the Match of the Night but it should’ve done more to live up to the expectations. I give this a high ****1/2 stars but I still think this will go down on a MOTY list when this year ends. Afterward, Kenny refuses a hug from Matt Jackson.

Dalton Castle vs. Marty Scurrl for the ROH World Championship

Man does this match suffer from burn out. The entire crowd is HOT during Kenny vs. Cody and DEAD here. When looking at Castle’s celebration half of the crowd left. This was a decently solid character match of Marty using his Villian Gimmick and Dalton’s Amateur wrestling background. The match starts slow too which does nothing to help it. The first great spot in this match was Scurrl’s backdrop sending Castle into the stairs. Scurrl works the arm of Castle in this match but it never really plays into anything big. Nick Aldis, the current NWA Champion sitting ringside passed Scurrl a pair of pliers which he used to remove the turnbuckle, this literally does nothing important in this match. Multiple different times in this match Castle hits some very impressive deadlift germans bringing him in and out of the ring. Marty looks for his powder for a good couple of minutes. He finally gets it but he gets it kicked in his face, blinded he does the finger break spot to the ref. Bangarang by Castle but the ref can’t count the pin. Scurrl wears down Castle with his Chicken Wing Submission. Scurrl repeatedly stomps on Castle’s head. A final Bangarang by Castle ends the match. ***1/2

Final Word: This show was good, through all the technical difficulties and crowd burn out, I tried hard to just focus on the action. Ibushi vs. Page was a great adrenaline rush, SoCal vs. The Bucks and Flip was a glorious spotfest, Cody vs. Kenny without all the context will go onto the Match of the Year list and Castle vs. Scurrl was a great character match. A high con was the Bully Ray segment I hope this is the last time we see him, The women of Final match was very awkward and the Young vs. King match had a cheap ending. This show was definitely boosted into being good by the Kenny vs. Cody match.