Wrestler of the Month: Adam Cole +10, it was an insane month for wrestling but coming out of it I believe one person stands out. Adam Cole was the MVP of NXT Takeover NOLA which was the best PPV of the month, won a ***** ladder match for the North American Championship and led a faction to solidified glory this month. Adam Cole had consistently the best performance of the month

Match of the Month: Johnny Gargano vs. Tomasso Ciampa in an Unsanctioned Match for Johnny Gargano’s NXT Career +10, This match had been built for hundreds of days. Since NXT Takeover Chicago last may, this had been one of the hottest storylines in NXT even with Ciampa sidelined. When it finally picked up this feud was straight fire. They rightly main evented NXT Takeover NOLA and had a story-filled, work rate and extreme match for the ages. Everything someone can love about wrestling is found in this match. 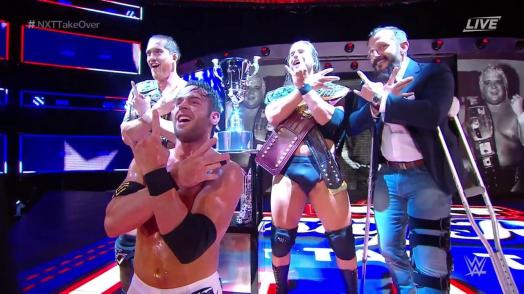 Team of the Month: Undisputed ERA +8, Even with Bobby Fish injured the ERA was really successful and intriguing this month. Roderick Strong FINALLY turned heel in WWE and joined Undisputed, they retained the tag titles and had just an overall fantastic character showing.

Feud of the Month: Tomasso Ciampa vs. Johnny Gargano +8, as previously stated, this match had been built for hundreds of days. When it finally picked up it was so satisfying. Tomasso Ciampa was an amazing despicable heel and Johnny Gargano is the best face in wrestling right now. It was a former team break up story as well which added so much heat to it. It was a feud made in heaven.

Most Improved: Shinsuke Nakamura +7, a disappointing outing at Wrestlemania 34 against AJ Styles turned into something great. Nakamura immediately turned heel at WM 34 and this creates a great character. The sarcastic “No Speak English” motto and the repeated low blows made a great heel. The new theme song is such a great decision too.

Woman of the Month: Ronda Rousey +8, an incredible debut at Wrestlemania 34 got her this spot. Think about this, in her debut match she had MOTN at a Wrestlemania. That means a lot for her career. Her career will take off if she is a full-time talent.

4-Star and Above Ratings from April: