Seth Rollins defeats The Miz to retain the Intercontinental Championship @ 20:30 ****1/2

AJ Styles and Shinsuke Nakamura for the WWE Championship ends in KO @ 21:09 ***

Seth Rollins vs. The Miz for the IC Title

This was honestly the one great thing in a bad show. This match had two of WWE’s best and they showed why. Seth Rollins has officially made the IC belt the most prestigious title in WWE. Rollins is the now of WWE and is the best he’s been since 2015. This match had some insanely great believable near falls. Including, the best moment of the match where Rollins hit the Falcon Arrow but on the follow-up suplex Miz turned it into a Skull Crushing Finale. The Miz has completely gone against the haters who say he can’t be a work-rate wrestler. This match was a hot opener in a hot crowd that had the time to become a classic and it did. Rollins is the MVP of Main Roster WWE and put on WWE’s best 2018 match only overshadowed by a horrible show. ****1/2

Nia Jax vs. Alexa Bliss for the RAW Women’s Championship

The Bullying and Body-Shaming angle taken for this match made me sick to my stomach. Then a 5-foot Bliss beat up a 6-foot 272-pound Jax for 9 minutes up until the end was totally unbelievable. This match sucked especially in comparison to what it was following. However, it was great to see Jax end up on top again. **

Jeff Hardy vs. Randy Orton for the US Championship

This started the SLOW match trend tonight. As all Randy Orton matches are it was very slow and rest holdy and Jeff Hardy has never come into his own with an even okay match yet in this after Mania 34 run. This was exactly what you expected it to be. I never expected Orton to win and he didn’t but it was still a very average match that could’ve been on SD. **1/2

Cass did a very good job of getting a bad match out of the work-rate Bryan if that was his goal. This was short and sloppy then Cass tapped. Not much to it. ** 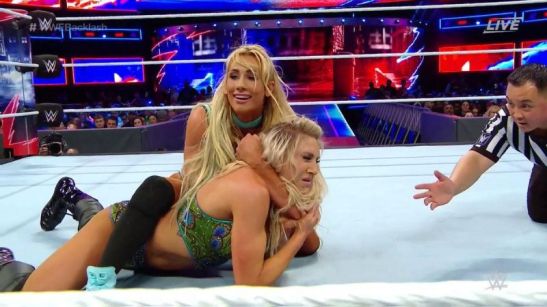 Carmella vs. Charlotte for the SD Live Women’s Championship

This match is summed up in this photo. Carmella rest held Charlotte for a few minutes then it ended fast with a leg kick/roll up by Carmella. Carmella is a good character and it was a good decision to keep it on her but this match had potential. Carmella isn’t bad in the ring but Charlotte is the workhorse MVP of the Women’s Division or at least WWE is telling us she is. This match lived up to none of that potential. **

AJ Styles vs. Shinsuke Nakamura for the WWE Title “No DQ”

Like GRR, these two were leading to an NJPW rivaling match. This match got much closer. These two were creating magic especially with the Kinshasa/ Chair Shot reversal that busted open AJ. This is closest they’ve gotten to WK 10 rivaling magic. Then the finish happened. The WORST finish imaginable had a strikefest end in a double low blow KO. In a No DQ match, they were still counted out. This is WWE getting revenge on NJPW for being better. ***

As it was just a rematch from RAW 2 weeks ago, I expected nothing. It was worse than nothing as nothing wouldn’t have wasted my time. This was this shows worst match but it also just followed the shitty finish of AJ and Naka. Then KO and Sami fought and then Braun Strowman did his normal annoying slam and scream shit. *1/2

This match sucked less than they crowd made it, even leaving after it started. This match started hot and then Joe kept Reigns in a rest hold for what felt like an hour. This had some good moments like Joe’s suicide dive and Joe’s uranage through the table but none of those were Reigns. Reigns’ momentum is clearly gone and this match did nothing to help. **

Last Word: This was the worst PPV of the year so far and they’d have to deliberately try to have a PPV be worse. After the amazing start in WWE’s best 2018 match, it tanked hard. Each match after was boring and long with Braun/Lashley vs. KO/SZ being the worst offender.

One thought on “WWE BackLash 2018 Review”