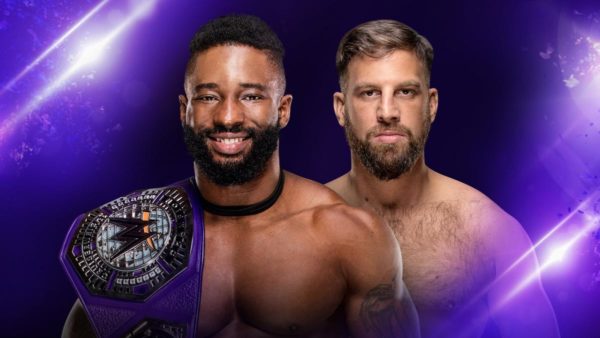 Rating: **3/4, A pretty fun opening match and TJP looked great in this match showing a technical side and a dastardly heel side too. The match never really got anywhere though but was fun while it lasted.

Drew Gulak vs. Cedric Alexander(c) for the Cruiserweight Title:

Rating: ****1/2, this is my favorite cruiserweight match of the year just topping Buddy Murphy vs. Alexander but this one had a great story along with well-executed spots. These two worked very cleanly without a botch and the pacing was fantastic with the opening being a feeling out period and it really escalating. The main story was Gulak went to insane lengths for him to grab the title and make a better 205 Live showing resiliency and even breaking his “No Fly Zone” rule. These two put on a very good match and Alexander looks great going into his match against Buddy Murphy at Super ShowDown.

Deonna Purazzo and Dakota Kai vs. Lacey Evans and Aliyah:

Rating: ****1/2, what could’ve been a MOTY contender because of amazing spots and a great chemistry between Dunne and Ricochet got cut short because of an attack by Undisputed ERA. However, this match delivered on so many levels. I normally give non-finish matches under a 4-star rating regardless, however, this match was heading into the 5-star regions and I had to acknowledge the match these two put on. The crowd was into it 100% and both got to look really strong.