Rating: ***1/2, A good technical opener and it’s always great to see Jushin Liger in the spotlight. Kenny King keeps showing a lot of potentials recently and in this match he really shined hanging with the legend. Kenny delivers a great heel ending turning on Liger out of nowhere and delivering the spinebuster FTW.

The Briscoes vs. So Cal Uncensored for the ROH Tag Titles:

Rating: ***3/4, This match just barely tops the ALL IN tag match and both were great. The Briscoes looked dominant in this match and delivered some great tandem offense. The match was really going and heating up into a tag classic because both are established teams that have great chemistry but Frankie Kazarian gets hurt and isolates Daniels for the rest of the match. I was worried about Kazarian’s condition instead of the in-ring work but once the in-ring work picked back up again it very much delivered with Daniels turning in a great resilient performance.

Tenille Dashwood vs. Sumie Sakai for the WOH Title:

Rating: ***1/2, after nothing has happened with this belt or Sakai in ROH for MONTHS. It was very refreshing to see for these women to be in the spotlight and deliver. The match worked really well and Dashwood locked really good however the selling of the shoulder was a little weird and I didn’t know someone could pass out from an armbar. The work in this match was great and the sliding powerbomb by Dashwood to ringside is a standout spot from this match. Hopefully, more can be seen from the WOH division on this caliber.

Punishment Martinez vs. Chris Sabin for the ROH TV Title:

Rating: ***, This match started well. Sabin looked great in this match with his comedy intro and his motivation to win the title. However, about 3 minutes in Martinez took over and dominated the rest of the match. There were dimensions that should’ve been played up to in this match with Sabin picking up the win but with Cobb being the likely next TV champ it makes sense.

Flip Gordon and Colt Cabana vs. Bully Ray and Silas Young in an Elimination Table Match:

Rating: ***1/4, This feud has had atrocious match after atrocious match and they finally managed to make a quality encounter. Flip Gordon delivered a great performance highlighted with the 450 through a table. The storytelling was decent and seeing Colt Cabana in-ring again is always welcome. Bully Ray is one of the worst things in wrestling currently and that still bleeds through.

Rating: ****1/4, While it played out like the Survivor Series tag match from last year’s WWE Survivor Series with much of the beginning of the match focusing on star power, unlike that WWE match it really picked up and delivered some fun spots. Like most Bullet Club matches it was a great fury of dives and high spots. Everybody turned in a great performance in this match too which is rare for 10-man tags. I also loved the interaction between Hangman Page and Tomohiro Ishii which I’d love to see in a single’s match. This was fun and MOTN so far. 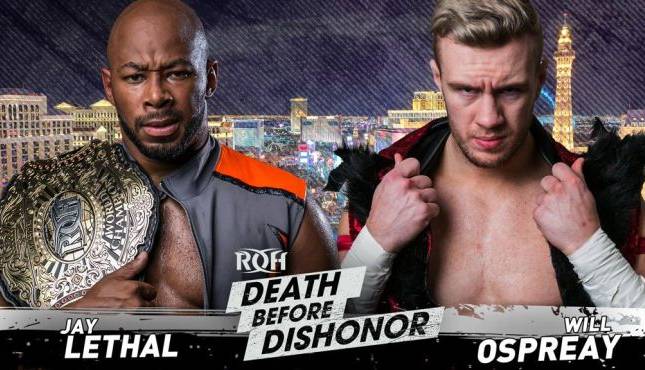 Jay Lethal vs. Will Ospreay for the ROH World Title:

Rating: ****3/4, ROH this year has been too focused on polishing its craft and not delivering great matches. There are a few standouts but nothing I’d say would rank on a MOTY contender list. Once Lethal grabbed the title you could tell something was gonna change and it did. Lethal has taken the belt and ran with it. This match here is ROH’s best match of this year by far. Will Ospreay showed up as a heel and that’s awesome and these 2 had amazing chemistry and from minutes in until the end, the match was flying. These two striked the hell out of each other and delivered some great high-flying. This match was a big highlight of this show and ROH’s MOTY (so far)

Last Word: While most of this show was kinda lethargic and without urgency, the highs were higher than anything so far this year in ROH. The undercard was good starting with Liger vs. King, SCU vs. The Briscoes and Sakai vs. Dashwood all good matches but Martinez vs. Sabin was a stinker, however, the Cobb appearance made up for it. The final two matches were a great way to end the show, The 10-Man tag was mindless fun and the main event of Lethal vs. Ospreay was ROH’s MOTY so far. The total show felt long and had a lame mid-card but the undercard shined and so did the final 2 matches. So far in 2018 ROH hasn’t been perfect and this continues that trend but Ospreay vs. Lethal comes to near perfection.