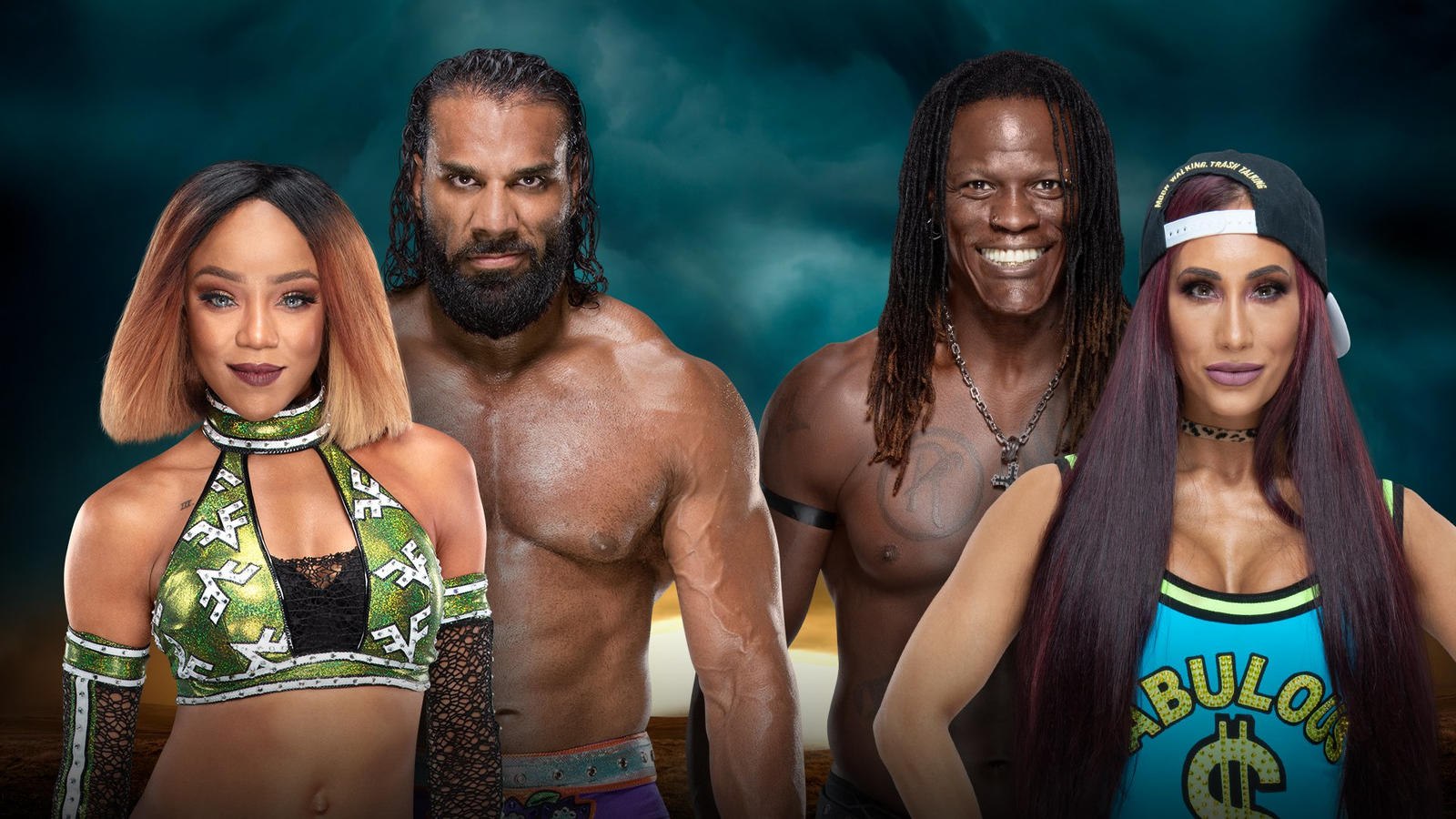 Jinder Mahal and Alicia Fox vs. R-Truth and Carmella MMC Final for the Royal Rumble #30 Spot:

Rating: *, This is peak annoying for WWE. This is who they chose to fight for the prestigious Royal Rumble spot. The dance break was annoying, the match had no action, and it felt too long at 5 minutes. No Thanks.

The Usos vs. The Bar(c) vs. New Day for the Smackdown Tag Titles:

Rating: ***3/4, This was a very fun triple threat tag match between 3 of the best ever WWE tag teams. While it could’ve been much better, I’ve learned to temper my expectations with the WWE but this was very solid. It had some great new spots from these guys that seem to repeat spots over and over especially New Day. The match was surprising and fast-paced and very enjoyable.

Natalya vs. Ruby Riott in a Tables Match:

Rating: ***1/4, Natalya put in an amazing babyface performance knocking out Riott and her squad with intensity. Riott also played an amazing heel and stirred the pot whenever she could. While there were moments of awkwardness and in-ring roughness it was a relatively clean match that told a very good story out of a bad feud.

Rating: ***, This was a Raw match on PPV that should’ve been better. The pace was mostly slow except for bursts of offense from Balor and Mcintyre did an okay performance as a dominant heel but took the loss nonetheless. The Dolph Ziggler interference was unnecessary and added nothing. Yet, it was a match between two very talented men and they mixed in some good wrestling here.

Rey Mysterio vs. Randy Orton in a Chairs Match:

Rating: ***, This match had a very weird layout but kept interesting with some unique spots. Like most Orton matches, this was really really slow at parts but the energy of Mysterio kept some moments highlights. This was a match ripped from WWE in 2009 but with men who have aged. There was almost no story here but there was a dynamic of cocky heel versus underdog face that was worked decently.

Ronda Rousey(c) vs. Nia Jax for the Raw Women’s Title:

Rating: ***3/4, It’s finally totally hit me how well Rousey has taken to the WWE. She is incredible. She carried one of the worst current wrestlers on the women’s roster to a near 4-star match. She fights with amazing intensity and hits her moves so cleanly. Jax did some good work in this match but most of it was on Ronda’s side. The match felt big and Ronda impressed again. This is yet another showcase of how good women’s wrestling has gotten in WWE.

Rating: ****3/4, This was INCREDIBLE and easily the best thing WWE has given us this year. This was a barnburner but didn’t feel long at all, I never wanted this to end. These guys told an incredible story and Daniel Bryan is the best heel in the world right now even though that’s a weird sentence today. The WWE crowd resonated with the storyline too getting this is awesome chants even though the match was never at a breakneck speed. They mixed the typical amazing in-ring work like always and had a lot of great technical wrestling moments in here too. This was a stand-out match in a bad year for the WWE.

Seth Rollins vs. Dean Ambrose for the Intercontinental Title:

Rating: ***1/4, the crowd ruined a match that was a genuine fight with so much great storytelling. Yes, this was a disappointing match but it wasn’t boring or even bad. I kept expecting it to end via DQ or Countout but Ambrose won cleanly which no one expected. The match never kicked into really any gear but kept itself running off of great storytelling. I want them to get another chance to put on a banger because I believe this match should’ve been better than it was. It was worked really slowly which is shocking from Rollins and Ambrose but the crowd really took a shit on this one.

Becky Lynch vs. Charlotte vs. Asuka in a TLC Match for the Smackdown Women’s Title:

Rating: ****3/4, This was another incredible match out of nowhere and it’s amazing to see how far the women have come in WWE. This main evented a PPV for another reason than the fact that they were women which to me is the biggest step in the evolution so far. These 3 ran through insane spots while working really clean and stories were getting continues, Rousey comes out to attack Lynch and Flair and Asuka completes her dream. This was similar to a match like Lesnar vs. Rollins vs. Cena from Royal Rumble 2015 but an amazing step in history for women’s wrestling. I’m proud this was the last WWE match this year.

Last Word: This is without a doubt one of WWE’s best shows in the past 2 years. While unfortunately, that isn’t saying much this show feels like a huge step in the right direction. While outside of 2 amazing matches the show suffered from being really long and WWE’s typical lame booking, those 2 matches were some of the best WWE matches in a long time. Styles vs. Bryan was an amazing storytelling technical match and Asuka vs. Flair vs. Lynch made history and looked great doing it. While WWE still has it’s problems they are now realizing what they can do to make it better. I believe Vince Mcmahon is stepping down on Monday and giving control of the company to his kids who while HHH loves killing the indies, the WWE will be in more relevant hands. I’m looking forward to 2019 because this show sets a precedent for what could be.