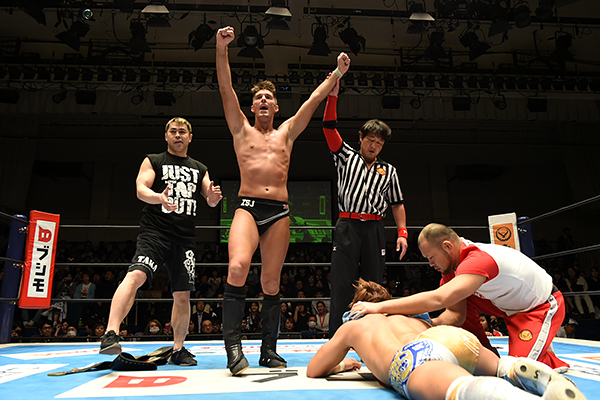 What a week for Wrestling! The New Japan Cup was consistently great, Raw was surprisingly good and there were multiple over 4-star matches.

Wrestler of the Week: Zack Sabre Jr. With multiple amazing matches and pulling out huge victories over Ibushi and Sanada this week and Tetsuya Naito last week, Zack Sabre Jr picks up 5 points on the overall leaderboard.

Match of the week: Zack Sabre Jr. vs Kota Ibushi. An amazing technical wrestling bout going over 20 minutes and telling a great story. By the end, Zack Sabre Jr’s upset victory felt less like an upset and more like a grueling victory. Picks up 5 points for both on the overall leaderboard.

The team of the week: Bludgeon Brothers. Looking Dominant and telling a good story from Fastlane to the match on SD Live with Jimmy Uso and Big E the repackaged Harper and Rowan were showing their new characters really well. Both pick up 4 points on the overall leaderboard.

Women’s Wrestler of the Week: Nia Jax. This week saw Tenille Dashwood’s ROH one on one debut but I gave the points over to Nia Jax. Setting up the inevitable Bliss vs Jax at Mania for the title, this week on Raw Jax gave a great performance in character and beat a local wrestler. She picks up 4 points this week.

ROH TV: Flip Gordon. Winning a battle royal to start the show along with Shane Taylor and then beating Taylor in the main event to secure a shot at the ROH TV Title, Flip Gordon picks up 3 points for the MVP leaderboard.

Raw: John Cena. The only ever time I gave a wrestler the MVP of a show for just a promo was the Miz with the Mizzies on a slow episode of Raw a couple weeks ago. This week was not a slow episode of Raw but I still felt John Cena was the MVP.  Putting on one of the best promos of his career, Cena entered the crowd to cheer with fans and at the end challenged the Undertaker like no one has ever done before. John Cena picks up 5 points on the MVP leaderboard.

SD Live: AJ Styles. Finally, we can get to the build between Shinsuke Nakamura and AJ Styles and this week it started off with a bang. A good promo started off this week’s episode then transitioned into a good match between Styles and Rusev. AJ Styles picks up 5 points on the MVP leaderboard.

205 Live: Cedric Alexander. A match I’ve been looking forward to since the beginning of the 205 tournament happened this week and it blew away my expectations. Roderick Strong and Cedric Alexander put on a show and Alexander pulled a roll-up victory getting himself 3 points on the MVP leaderboard.

NXT TV: Adam Cole. A great match only taken down by a bad ending between Adam Cole and Pete Dunne for the UK Championship gets Adam Cole 3 points on the leaderboard.